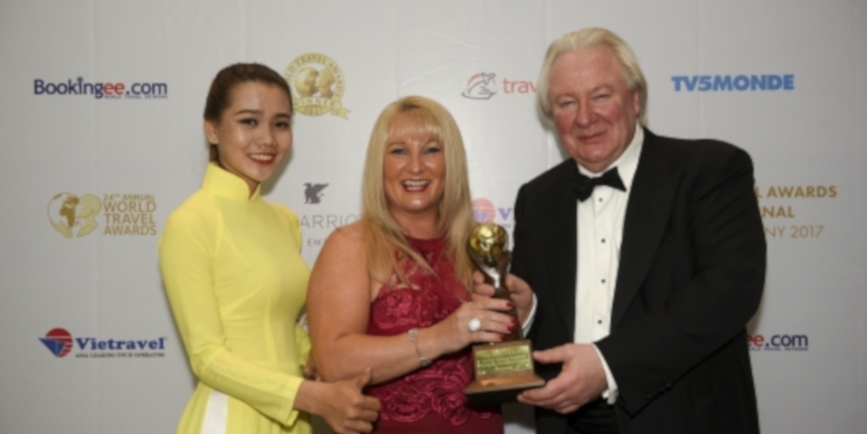 The Glasgow-headquartered technology firm, which has a presence in seven countries globally, staved off stiff competition from seven contenders including Expedia Inc. to win the coveted title – one it also picked up in 2014, 2015 and 2016.

The technology firm’s Chief Operations Officer (COO), Kirsty Orr, accepted the award on the company’s behalf at last night’s Grand Final Gala Ceremony, which took place at JW Marriott Phu Quoc Emerald Bay Resort & Spa in Vietnam and was attended by hundreds of travel, tourism and hospitality leaders from around the world.

“This award recognises Traveltek’s dynamic packaging solutions as the world’s best, providing travel companies in key markets around the globe with the most advanced selling tools on the market,” said Orr.

“No other company listens to its clients and works in close collaboration with them like we do, and that is the real reason we have scooped this accolade for the fourth year running.”

Orr added: “With the help of our valued customers, our talented development team constantly improves and refines our technology and as we look ahead to 2018, we can promise our clients enhanced features that will take the user experience to new heights and once again, uphold Traveltek’s reputation as an industry leader.”

The World Travel Awards, which were established in 1993, acknowledge, reward and celebrate excellence across all sectors of the tourism industry.

Traveltek’s win at the 24th edition of the prestigious event caps a remarkable year of growth for the technology firm. In 2017, it has expanded into new international markets, increased its workforce by 50% and embarked on a User Experience Transformation Strategy.

It follows a capital injection of £5.3 million, secured from private equity fund manager YFM at the end of last year, to plough into product development and worldwide expansion.

Traveltek’s goal is to consolidate its position as a global leader in the travel technology sector and this strategy has seen the company debut in the Middle East and Asia this year with new satellite offices launched in Dubai, Hong Kong and Singapore.

The company is promoting its full suite of products in these markets, including its award-winning dynamic packaging technology, which enables agents and tour operators to hand-pick every facet of a customised travel itinerary, from flights and hotels to transfers and car rental – and then sell them as one single package.